For many things in life, it seems like there’s a weather analogy. A happy disposition is often described as “sunny.” Something foreboding could be said to “cast a cloud” on someone. And, according to MozCast, indications of a big change in Google’s algorithm can be described as “hot and stormy.”

That’s not bad news for Google marketers. Tools like MozCast can help you do your job better and help you decipher why you might see a sudden change in your search rankings or other SEO-related shifts. The tricky part, it seems, is keeping up with all things Google: the algorithm, the new features, and what people are searching for the most.

DOWNLOAD OUR FREE SEO TEMPLATE HERE TO ORGANIZE YOUR KEYWORD RESEARCH INTO AN ACTIONABLE PLAN FOR YOUR SITE.

That’s why we’ve put together this list of the major highlights in each of those categories for the month of June. Read on for the full recap below.

“Major updates,” he continues, “are rare, but have the most meaningful impact on marketers.”

In May, rumors emerged that Google was working to add more features along the lines of featured snippets, like including job listings directly on the search results page. Word of that feature came to fruition when Moz Associate Dan Shure tweeted images of his reported results in late April: 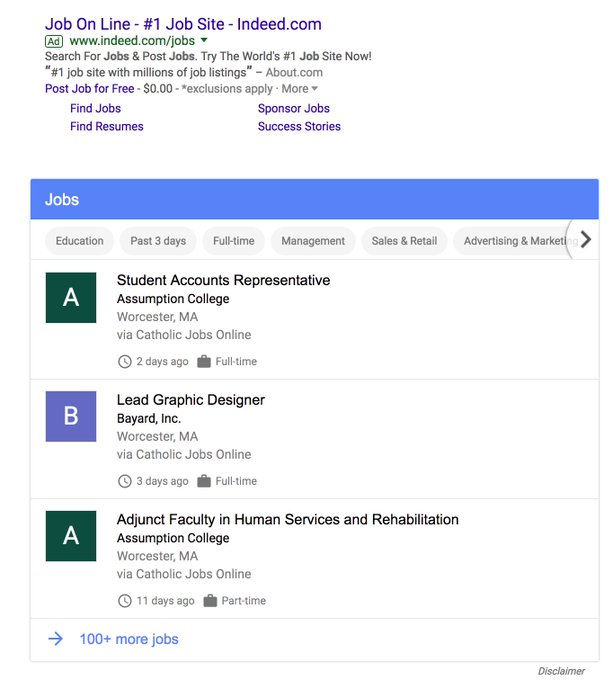 … and later went on to make this video about what he found:

Those rumors were confirmed at Google I/O 2017, and on June 20, Google for Jobs officially launched. As per the image below, it correlated with a spike in the MozCast temperature on the same day:

Source: MozCast
“Starting today in English on desktop and mobile, when you search for ‘jobs near me,’ ‘teaching jobs,’ or similar job-seeking queries, you’ll see in-depth results that allow you to explore jobs from across the web,” wrote Google Product Manager Nick Zakrasek in the official announcement. “For many jobs, you’ll also see reviews and ratings of the employer from trusted sites, right alongside the job description, and if you’re signed in, for some jobs you’ll even see how long it would take to commute to the job from home.”

Zakrasek goes on to describe the feature as a work-in-progress, adding that more filters and details will be added to listings as Google continues to tinker with the algorithm to produce better job results.

On June 1, Google announced it would further crackdown on websites that feature intrusive ads like these. And while that might sound great for many, some content creators who rely on ad revenue were concerned.

But as it turned out, Google’s intent wasn’t to do away with ads completely — rather, it appeared to be for webmasters to move away from digital ads that interrupt a user’s content consumption, without losing critical ad revenue in the process. It was largely the result of Google’s partnership with the Coalition for Better Ads, which recently developed Better Ads Standards — and it appears that those standards serve as the foundation for Google’s new ad recommendations to content creators. Once publishers modify their ads to meet the new standards, they can then use Google’s Ad Experience Report to test if they’re in violation of the new standards.

This announcement comes on the heels of May’s reveal of Unique Reach: “a new measurement tool that captures the number of times the same person has seen an ad,” according to TechCrunch, measuring “how many people are shown display and video ads and captures unique users in addition to average impressions per unique user.”

At this point, it’s not entirely clear what the penalty will be for those in violation. The official announcement makes no mention of search ranking implications, though, given the search engine’s history within this realm, we wouldn’t be surprised if websites in violation perform as well in search results. In the meantime, we recommend checking out Google’s criteria for what constitutes a “bad ad” on its DoubleClick blog.

No More Inbox Scanning (for Ads)

According to Google, there are over three million organizations using G Suite, its collection of email, video communication, and cloud storage apps (among others). And while G Suite users have never been privy to email scanning for ad personalization, now, neither will free Gmail users anymore.

The announcement came on June 23, when it was revealed that users of Google’s free email service would now be able to disable ads personalization in their settings, which means that their emails will no longer be scanned for data to tailor ads displayed for the user. The same will remain for G Suite users, as well.

“G Suite customers and free consumer Gmail users can remain confident that Google will keep privacy and security paramount as we continue to innovate,” writes Google Cloud SVP Diane Greene. “As ever, users can control the information they share with Google at myaccount.google.com.”

You may have noticed that local business listings recently made their way into your search results when you enter a query like, say, “pizza.” 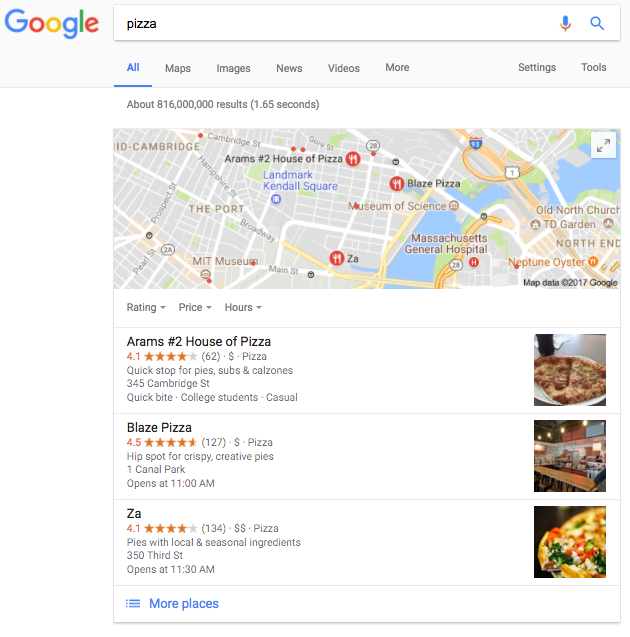 And for a select few — like celebrities or sports teams, for example — those business search results could also include what TechCrunch describes as “social network-style updates about their activities right to Google’s search result pages.”

But now, that feature is open to all those using Google My Business in the form of Posts: a way to create and share business-specific content — like events, products, and services — that can appear directly in search results.

Other New(ish) Features You May Have Missed

Funny how, in an age where there are more entertainment options than ever, many of us still catch ourselves muttering, “I’m bored.” But now, for those occasions when — gasp — Netflix doesn’t quite do the trick, Google has made it easy to find out what’s going on in real life.

On the Google app and mobile web only, search queries like “events near me” now yield a specialized results page with a calendar of all local happenings. Here’s what happened when I tried it on Chrome for mobile: 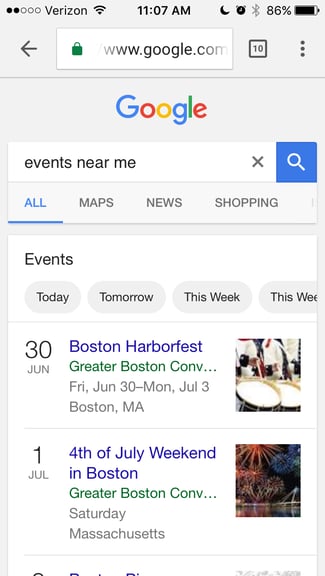 Within that special category of results, I can tap on any of them to buy tickets directly from my phone. 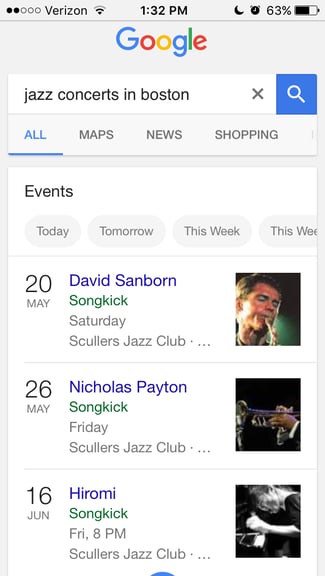 Gone are the days of conducting a Google image search and having to scroll all the way over to “search tools” to narrow your results — on mobile, at least. Now, when you want to find an animated image, Google makes it easy for you, by displaying a “GIF” filter directly below the search bar. 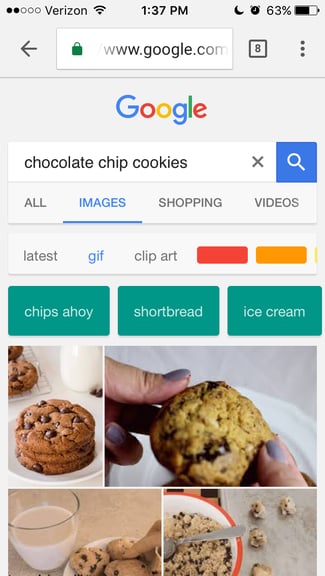 Limiting your results to animated images isn’t the only filter available. As the above image indicates, you can also filter results according to color, timeliness, and more specific categories; for example, a certain brand of cookies, instead of just “chocolate chip cookies.”

Personally, I wasn’t entirely sure what to do with the color filter — until I applied the turquoise (my favorite color) option to a search for “home decor”: 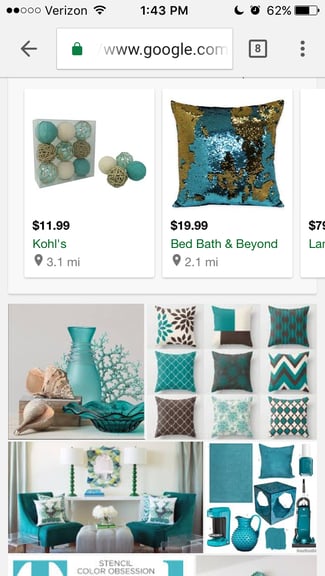 First of all, I’ll take one of everything. Second, not only does the search yield images of exactly what I was hoping to find — turquoise home decor — but it also displayed shopping results: an ad feature Google rolled out in May 2016. And in a more recent, but relevant news tidbit, Google has been piloting Shopping ads on its Display Network, as reported by SEL in May.

Although this feature hasn’t launched yet, Google announced at the end of April that, beginning this October, the Chrome browser will display a “not secure” warning on HTTP pages — those that haven’t transitioned to the more secure HTTPS — in three situations:

To elaborate, the “S” in “HTTPS” stands for “SSL,” which stands for Secure Sockets Layer — the technology that encrypts your connection to a website, so that hackers can’t intercept any of your data. And in January, Chrome began labeling HTTP sites as non-secure. This latest development will only take that a step further. Here’s what the non-secure label looked like after the January update:

Source: Chromium Blog
Not sure how to enable HTTPS? Check out Google’s guide here.

You can file this one under, “That didn’t happen when we tried it.” Alas, for a select few, Google is testing out a new categorization system for its hotel reviews. Google rolled out some pretty detailed hotel search filters and criteria options in July 2016, and now, it seems to be testing some new ways for users to filter reviews.

Sergey Alakov detailed the possible changes on his blog earlier this month, which would allow users to narrow reviews according to the type of traveler, like couples, solo travelers, or families with children. If that feature sounds familiar, you might recognize it from TripAdvisor, which allows travelers to limit reviews only to a certain score, traveler type, and travel period. Now, Google might add that to its portfolio of capabilities.

Google isn’t exactly a stranger to virtual or augmented reality. When it introduced Cardboard, it was a financially prudent way for almost anyone with a mobile phone to virtually experience Google Maps and other adventures. YouTube is host to myriad 360° videos. It makes sense that Google would only want to strengthen its foothold in the VR space — its acquisition of Owlchemy Labs is just one sign of that.

Owlchemy is an award-winning studio and producer of VR experiences from every point in the spectrum — games and job simulations to name a couple. And given the earlier news about Google’s job listings within direct search results, we can’t help but wonder what, exactly, the search giant is up to in the realm of recruiting.

Until we find out for sure, here’s Google’s official statement on the matter:

Together, we’ll be working to create engaging, immersive games and developing new interaction models across many different platforms to continue bringing the best VR experiences to life. There is so much more to build and learn, so stay tuned!”

We’ll be keeping an eye on all things Google and picking out top news items, algorithm updates, and trends that can aid your marketing. Enjoy your July — we’ll see you next month.

DOWNLOAD OUR FREE SEO TEMPLATE HERE TO ORGANIZE YOUR KEYWORD RESEARCH INTO AN ACTIONABLE PLAN FOR YOUR SITE.