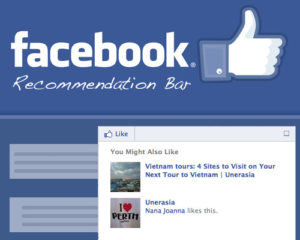 Facebook launched a Facebook Recommendations bar on Thursday that allows users to discover new articles based on what others in your network are reading and sharing.

When a Facebook user likes an article via the new recommendation bar, the story is published to their Timeline — similar to what happens when you use the Like button — and it shows up in friends’ news feeds.

“The recommendation bar is another option for websites — particularly blogs and media sites — to be more social and active, keep people on the site longer, distribute content across Facebook and benefit from referral traffic,” a Facebook spokesperson told Mashable.

Here’s what it looks like: While a Facebook member reads an article on the site, a small pop-up window displays at the bottom of the screen, which highlights recommended articles and prompts them to like the page, according to a blog post from Facebook developer Jeffrey Spehar on the company’s developer page.

Facebook has been testing the social plugin, Facebook Recommendations with sites such as Mashable, Wetpaint and The Mirror. So far, Facebook says, the feature has been successful in getting articles in front of more eyes.

“In early tests, sites are 3x times the click through on the stories it recommends than through the Facebook Recommendations Box,” Spehar said.

To install the social plugin, users will need to copy a few lines of the Facebook code and paste it onto their site. For more details on how to set it up, you can check out Facebook’s step-by-step instructions on its developer page.

“We recommend you include Open Graph markup on your articles so Facebook can properly display them on the site,” he added.