Tumblr is a micro-blogging platform that churns out millions of posts on a daily basis. There are currently 108.6 million blogs on Tumblr, which might seem intimidating to anyone not already using it.

Tumblr could be useful to you for many reasons, depending on what you’re looking to get out of it, for example, inspiration, scrapbooking, communication, or a portfolio.

The site is a mix of bloggers, brands, and tastemakers. But to keep it simple, there are essentially two types of bloggers on Tumblr: those who create original content and those who curate, or re-blog posts.

Depending on how you want to utilize the platform, this guide will help you move from a Tumblr novice to a power blogger.

Tumblr registration is simple: You only need an email address, password, and username. How 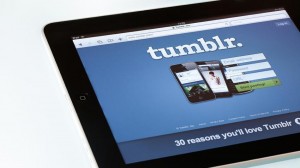 ever, considering the number of existing blogs on Tumblr, it’s possible that you won’t get your first choice of username.

With Tumblr, you can change your URL later, so if you absolutely hate it down the road, that can be fixed — but keep in mind that change will affect SEO.

Be sure to upload a default image, too, to complete your profile.

Once you have an account, there are a number of following options, depending on how you want to utilize the site.

Some use Tumblr to write and create original content, for example, to document lifestyle, travels, milestones, or to showcase work.

Tumblr hosts some hilarious parody and nostalgia blogs that cater to specific persons, places, or things.

If you’re not creating your own content, Tumblr is also great for curating. Many users browse the web for the best and most interesting things they can find. It’s up to you to decide what that is: hilarious videos, inspiring quotes, breathtaking photos? Whether you like animals, fashion, art, music, film, or just a random assortment of interesting finds, decide what you want to blog about before going further.

Try to avoid the default theme, simply because there are hundreds more to choose from, and many talented designers have put a lot of effort into them.

Some themes are free, but if you really want your blog to stand out, consider paying for a premium theme that offers more personalized options.

Once you’ve selected a theme, you can customize further by editing HTML, changing colors or font type, adding a background image, or adding pages.

If you’re not ready to publish a post or want to come back to it later, you can either save it as a draft or schedule it in the queue. Both options are on the right side of the dashboard, or in the pull-down menu when you’re trying to post content.

At the top of the dashboard, next to your profile picture, you’ll see a series of colorful icons labeled by format: text, photo, video, etc. Depending on what you’re trying to share, the options in each individual post box are really easy to figure out.

For added convenience, you can place the Tumblr bookmarklet at the top of your web browser.

The tabs at the top of the dashboard allow you to filter between views: either just your posts or those from people you follow. (We’ll talk more about your followers later.) If you want to see your posts in the back-end, click on your tab. To view it as your chosen theme, click on your profile picture.

Each post in the dashboard has a series of buttons at the top-right, which lets you engage with others by re-blogging and liking their posts. (This is where the distinction between original content creator vs. curator is most prominent.) Most original content bloggers don’t re-blog very often because they are publishing to a certain style or subject.

However, the more followers you have, the more quickly their posts move on your dashboard — remember, there are millions of posts each day. If you want to keep all of your favorite posts in one place, the little heart at the right corner of each post is your friend. You can then click the heart tab on the far-right to access all of the things you’ve liked in one place.

By now, you should be set up and ready to “tumble.” But half the fun is discovering what other people are posting, especially if you’re using the platform to curate, or re-blog. So, how do you find other interesting people and blogs?

Tumblr has a series of tags, which you can view in Explore, that separate individual posts by different interests — for example, art, humor, music, fashion, television, etc.

A select group of people manages each tag and hand-pick posts best-suited for the category.

Additionally, Spotlight is a Tumblr feature that showcases various noteworthy blogs within each tag.

Tumblr is not just for self-engagement. There are a number of ways to connect with people you know and reach out to new people.

First of all, by authorizing Gmail, Twitter, and Facebook, you can see which of your friends are already using the platform.

See the envelope icon at the top-right where you can send a message privately. The feature offers different styles of paper-themed backgrounds and fonts, which makes each message seem more personal.

Some users have also enabled the “Ask Me Anything” feature. Keep in mind the user can post any question on his site, but you can always opt to ask anonymously.

Once you’ve successfully navigated the basics of Tumblr, take your blogging on the go. The platform has a free mobile app — available for iOS and Android.

The mobile app’s features are pretty similar to the website, except that the dashboard appears slightly more minimal. Otherwise, all of the things explained above are available on mobile. You can still post all the same formats of multimedia, and even customize your blog.

Tumblr is as vast as it’s the never-ending dashboard. There’s a lot more to the site, but this overview should give you a good head start.

What tips do you have for someone testing out Tumblr for the first time? Share your advice in the comments.

Get On Top Today!

On The Maps Digital Marketing Agency